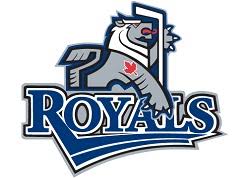 The Hitmen finally looked like a first place hockey team tonight and not the team that got murdered and made a joke out of against Medicine Hat a few weeks ago. They beat the Victoria Royals 5-2 in a game that could of been a lot worse if it wasn't for the great goaltending of Calgary native Coleman Vollrath. When I fist seen this kid was starting in net I assumed it was because he was from Calgary. A goalie that has only played 3 games (1-2) and having Polivka (6-5) obviously your main guy. One would assume you would start your main goalie against the first place team in the East. But Vollrath made some great saves which could of been more embarassing for the Royals than it already was.
Before any scoring even took place it looked scary for the Hitmen as they were on a 5 on 3 and Jamie Crooks had 2 break aways and great scoring chances and Driedger shut the door.

Alex Roach recieved his player of the month award for the month of October tonight and he proved that he deserved it scoring 2 great goals and potting an assist to boot. Also deservingly he was the first star. Best game I have seen him play or from any Hitmen defender so far.
Other goal scorers for the Hitmen were Brassart, Padakin, and Petersen with his first ever career dub goal. Stahl scored on a point shot for the Royals in the second and Hodges scored a beautiful goal with 1.5 seconds remaining.
Fights were Kanzig vs Rissling, Franson vs Henry, and if you count it Virtanen vs Carroll but all that was was them throwing off their gloves and Virtanen falling down which was probably for the better as Carroll is alot bigger.
This is the first time I have ever watched the Victoria/Chilliwack franchise ever play. One thing that I am amazed that wouldn't drive a coach nuts is the lack of effort #19 Logan Nelson puts in when he is skating off from a shift. Now I can't say he does this every game maybe he was lazy. But he skated off the ice while play was going on his end numerous times like he was skating out to a fucking tea party. It was like public skating time when he was getting ready to come off  If I was the coach screw his second on the team 16 points his ass should be benched. Total disrespect for the game and his team mates and the uniform he is wearing. I am not the only one in the crowd that seen that numerous fans beside me also pointed it out.
Former Hitmen Gogolev looked good out there. Probably the best skater the Royals had and was held to an assist. Its still up for debate but if Zane Jones continues to improve and the fact that he is 2 years younger than Gogolev it may prove to be a winning trade for the Hitmen.
I heard lots of great thing about the Royals Magee but he was pretty silent out there tonight. You could tell watching him that he has the skills and the heart but the wheels and the bounces just weren't going his way.
Shots were 29-26 for the Royals.
Tonight was also Cross Iron Mills night for those of you who don't know Cross Iron Mills is a mall north of Calgary I have never been there yet nor have no need to. But anyway in the second intermission they dropped baloons from the ceiling containing 5 and 10 off coupons at stores at the mall. This is a mall that costs the average Calgarian 10 in fuel just to get out. Anyway this quarter ton welfare woman with almost no teeth was sitting a few seats behind me. When kids were going for the baloons she was doing the classy thing and reaching her blubber past them and she ended up getting about 5 or 6 baloons. See as fun as I have at these games I also have to point out the things that irk me at them too. I still hate the fact that instead of having good looking girls go out and clean the ice they have old fat men do it. This makes no sense especially for a team with a budget like the Hitmen's. Also the Jumbo tron showing clips of people and grabbing me with a big wad of Copenhagen.
Oh well still the best possible way I can imagine to spend a friday night ( Now I feel older than dirt).
Next home game is Monday which was changed from Sunday against the Kootenay Ice so people can watch the Stamps play in a sea of green in Calgary. As much as I like Stamps games I am not going in -20 weather I will watch the game in the comfort of my home. Its going to be weird not cheering for Kootenay a team I watched for the last 3 years as much as I could. The Ice have some issues this year and should be a win for the Hitmen who are now on a 5 game winning streak.
Posted by CalgaryHockey at 21:49

Get Your News Widget